Christmas is both a sacred religious holiday and a worldwide cultural holiday. For two millennia people have referred to this day as a sacred day. Christians celebrate Christmas day as the day that Jesus of Nazareth was born, a spiritual leader whose teachings form the basis of the religion of Christianity. Popular customs include exchanging gifts, decorating Christmas trees, attending church, sharing meals with family and friends.

The middle of Winter has long been a time of celebration throughout many ancient practices and religions. In the centuries before Jesus was born, early European countries celebrated light and birth that occurred in the darkest days. In Scandinavia, the Norse people celebrated Yule from December 21st, the Winter Solstice, through to January. As a symbol for the return on the Sun, Fathers and Sons would go out into the cold and bring home logs. They would then feast until the logs fire died out, which could take as long as 12 days usually. The Norse believed that each spark that flew from the fire would represent the new livestock that would be born in the coming year.

In Germany people honoured the Pagan God Odin. However, people were particularly terrified of Odin, as they believed that he roamed the night sky observing the behaviour of his people. Because of this many people chose to stay inside through fear.

In Rome, winters were not as harsh as they were in the far north. The Romans celebrated Saturnalia, which was the holiday in which Saturn – the God of agriculture was celebrated. Beginning in the week leading up to the winter solstice and continuing for a full month, Saturnalia was a hedonistic time, when food and drink were plentiful and the normal Roman social order was turned upside down.

Members of the upper classes in Rome also celebrated the birthday of the God Mithra on the 25th December. Mithra was the Roman God of the unconquerable sun. It was believed that Mithra, an infant god, was born of a rock. For some Romans, Mithra’s birthday was the most sacred day of the year.

In the early years of Christianity, Easter was known as the most celebrated event of their calendar. However, In the fourth century, church officials decided to institute the birth of Jesus as a holiday. Pope Julius I chose December 25as the date for Christ’s birth, it is commonly believed that the church chose this date in an effort to adopt and absorb the traditions of the pagan Saturnalia festival. Unfortunately, the Bible does not mention the definite date for Jesus’ birth but we may find the answers in astrology…

The Birth of Jesus

The Birth of Jesus has been a subject that has fascinated many of us for the large part of the last 2,000 years. The last Millennium in particular has seen astrologers and interested astronomers grow their interest in the facts surrounding Jesus’s birth. Much of this has centred on the Jupiter/Saturn conjunction, reports of super-novae, historical records, and the few clues offered by the Gospels themselves.

If we accept that Jesus was the human vehicle to become the Godhead we know as Christ, this person must then be born without any human karma and with no conflicts between his persona and his spiritual nature. Astrologically when might this moment be? The answer lies not in the search for planetary patterns, nor in exploding stars. We only have to look to the Zodiacs for our answer.

At 16h23m07s GMT (18h43m55s LMT/ 18h50m37s LAT) on May 7th, 5BC in Bethlehem, Israel, the Sun was setting conjunct Jupiter in the middle of Taurus just as the Moon’s True N. Node reached 0º00’00″Aries . This timing would be the precise aligning of both the Tropical and Draconic zodiacs (with grateful thanks to Astrologer the Rev Pam Crane) Our Tropical Chart is what we show to the outer world, and our Draconic chart being our roots and our very soul.

The Persian Magi, who watching the heavens for signs of the Christ-Child’s coming, would first observe the triple conjunction and know that the prophesied time was coming near. “Following his star” they would then have waited for two more signs before they set off on their momentous journey – the Spring Equinox Sun rising in the Dragon’s Head (ie eclipses occurring close to the Equinox) and then the heliacal rising of Jupiter after a New Moon conjunct the royal star Aldebaran.

The royal star Aldebaran, is known as “the Watcher of the East” perhaps this is what was meant by “they have seen his star in the East”?

Interestingly, at this moment Jesus had a Moon/Venus conjunction in Gemini in the 9th House, so without doubt bestowing a hugely charismatic way of communicating and especially around spiritual and philosophical strands. With Jupiter, the ruler of expansive and higher ideals also conjunct the Sun in the 7th House of relating, this person’s birth chart is totally in keeping with the journey Christ undertook. 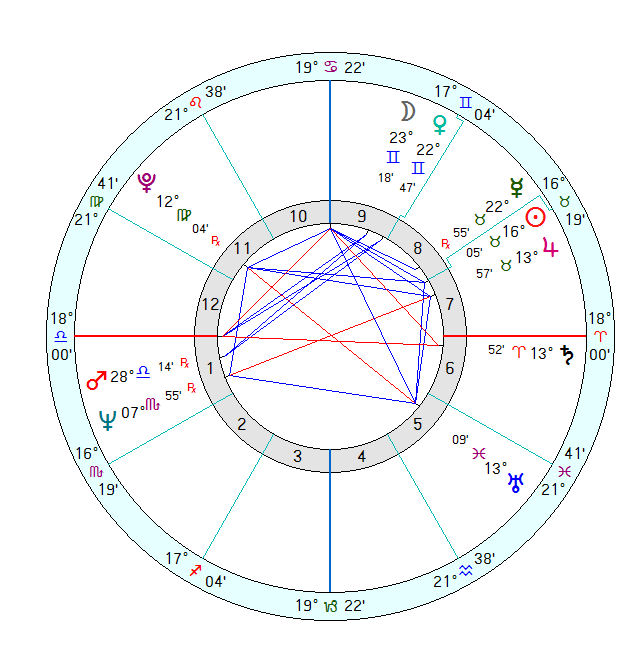 Mars is Retrograde from 30th October through to 12th January 2023. However, he has has been in shadow since the 2nd September, and...

Halloween is the annual holiday celebrated each year on October 31st. It originated with the ancient Celtic festival of Samhain. Samhain is...

Saturn has Stationed Direct in Aquarius, but will move into Pisces on the 7th March 2023.Please join me to understand what we can expect...