2016-01-06T00:00:01Published: Friday, 22 January 2016
by Patrick Arundell
, contact Patrick on Facebook or Email.
Ricky Gervais has come a long way, becoming an international star, winning Baftas, Golden Globes along with many other awards. So what does 2016 have lined up for Ricky? 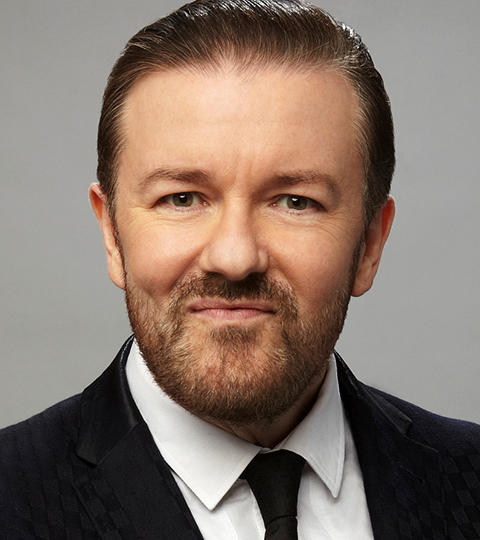 Ricky Gervais has come a long way in his lifetime. From a humble start in Reading, UK, he has gone on to become an international star, winning seven Baftas, five British Comedy awards and three Golden Globes along with many others. He is known for his work as an English comedian, actor, director, writer, producer and musician. Some of his best loved roles are as David Brent in The Office, which he also wrote and directed, and as Derek, a comedy of the same name. More recently his hosting of the 2016 Golden Globes attracted a social media storm for his witty and risqué remarks concerning various Hollywood glitterati, some of whom were not amused.

Ricky’s ability to improvise, act, imitate and create may be attributed to his Sun Mercury conjunction in Cancer. Indeed, with Cancer being a very intuitive and psychic sign, he has a natural gift for getting under the skin of the character he is portraying. To add to this, his natal Mercury is retrograde, which is reputed to be excellent for both stand-up comedy and comedy writing.

However, his horoscope chart also reveals other qualities that enable him to make those pointed observations, which inform much of his work. With both the Sun and Mercury in aspect to Pluto, he is very aware of others’ frailties, weaknesses and peculiarities, and knows how to play on these to bring a very human quality to his writing and acting. These perceptive traits are augmented by his Moon in Scorpio. Another vital part of his make-up consists of his zany and refreshing ideas, off the wall wisdom and thought provoking series such as An Idiot Abroad with Karl Pilkington, which can be linked with natal Mars conjunct Uranus in Leo. It’s a planetary combination that loves to stir things up and create shockwaves - something he certainly excels at.

However, he does have determined Saturn in Capricorn, which means he can be very ambitious, as well as practical and persistent when it comes to realizing his dreams. Another helpful influence is that of natal Jupiter in Aquarius - the sign of airwaves, gadgets, TV, social media and YouTube. All of these platforms have contributed greatly to allowing him to air his talents and make him the star he is today. Furthermore, with some spectacular Jupiter transits showing up over 2016, he looks set to do even better.