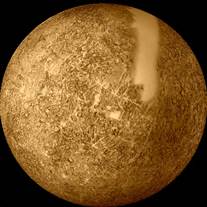 Mercury goes direct today, something that we can all cheer about, but despite any misunderstands, or mix-ups that have occurred, have you been able to grapple with anything that you had been putting off? I do hope so.

Yet the full effects of the retrograde won't untangle completely until the 27th June, when the planet reaches the position where the rewind first began on the 19th of May. However for now we celebrate a hopeful improvement. For your FREE Daily Horoscope Thursday 11th June 2015 for please read below...

Today's influences can bring news that could raise your spirits, giving you something to look forward to. A very tuned-in friend might have information regarding a difficult situation and perhaps offer a solution. In addition, don't hold back from sharing ideas with friends or colleagues as one of them could be a game-changer.

The people you socialize with have a knack of encouraging you to explore your creative talents. With the Aries Moon spotlighting ideas that you might want to take further, it's certainly time to showcase your skills. In addition, as Mercury fast forwards, consider putting a key plan into action that could boost finances.

As Mercury does a forward dance from today, you'll notice that annoying delays rapidly become a thing of the past. Whatever's been holding you back will soon cease to trouble you, leaving you with a clear path and the opportunity to get back up to speed. Later, a lively set of links are perfect for a sociable and fun evening.

A strong belief in the power of change guides your actions. And, while your dreams are vital to success, today's Moon gives you the determination to make them happen. However, you'll make better use of your energy if you concentrate on one task at a time, as a restless mood suggests your focus could easily shift.

The Aries Moon puts you in planning mode. And, as Mercury dances ahead, you'll find it easier to make progress. Plus, you seem to be in one of the best social periods of the year, which can be excellent for creating a lively support network of friends. Later, it's worth going out of your way to make someone's evening special.

If you've experienced delays with your job or a key ambition, then you can relax from today, as things begin to gel. Perhaps you'll hear the news you've been waiting for, enabling you to push ahead. Meanwhile, don't dismiss a bright idea as it could be quite lucrative in the long-term, bringing in a new source of income.

Things may not work out due to a potentially disruptive Moon Uranus link. If you're able to adopt a flexible approach you'll find it a lot easier to navigate through the day and turn it into a success. In addition, Mercury moves ahead which could signal the end of a recent and somewhat upsetting romantic misunderstanding.

With the Jupiter Uranus connection enlivened by the Aries Moon, stay alert for an opportunity that could show real promise. It might be a bit of a challenge, but certainly worth the effort required to move out of your comfort zone. However, once you've grasped it, it will need some perseverance to make it a success.

With Saturn about to move back into Scorpio, you may feel like giving up on a goal or dream that seems to be more trouble than it's worth. However, there's no need to abandon it completely, just put it to rest for a while. Allow your mind to mull over new possibilities and you might feel moved to try again in the future.

If you've suffered delays at work or been frustrated by an uncooperative computer or other gadget, Mercury's forward motion from today may spell an end to such troubles. Solutions should begin to fall into place, which means you'll be up and running in no time. Later, a get together can boost your mood.

There's a directness about certain conversations that can help get things moving, and might prove quite refreshing today. By cutting through the fluff, you'll save time and avoid future complications. There's also a strong focus on your leisure zone, so if you feel tempted to chill in some great company, then do so.

If home-based projects have been delayed and you're keen to make a start, take heart. Mercury pushes ahead from today, so any frustrations you've felt should soon be a thing of the past. Even so, a Moon Mars link could see you spending on impulse. Opt for some research first, particularly if you're buying a big-ticket item.

Warrior Mars in Scorpio aligns with powerbroker Pluto in Capricorn, making this an intense day when we won't miss a trick.

The Moon in Sagittarius aligns with jovial Jupiter in Aquarius bringing an upbeat and optimistic quality to the day ahead.

Today's Solar Eclipse in Sagittarius is also a Supermoon and can find us drawn to opportunities and exciting adventures.

The Moon in Sagittarius forges a positive angle with healing Chiron in Aries which can inspire us to resolve a relationship issue.

The Moon in Scorpio aligns with Venus in Capricorn which can make us aware of what would serve us and what would not.

Mystical Neptune turns direct from today in the dreamy sign of Pisces after its rewind phase of many months.

The Sun in Sagittarius aligns with prudent Saturn in Aquarius so we'll be ready to knuckle down to some work.