2016-10-02T00:00:01Published: Monday, 24 October 2016
by Patrick Arundell
, contact Patrick on Facebook or Email.
Mercury's move into Scorpio from today can intensify conversations and encourage us to look beneath the surface to what may be hidden from view. 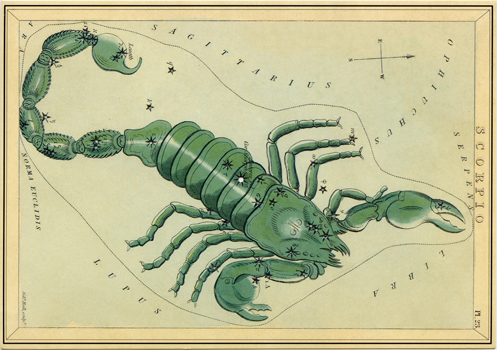 Mercury's move into Scorpio from today can intensify conversations as well as encouraging us to look beneath the surface to what may be hidden from view.

The way we speak can be quite compelling too, especially if we are passionate about a subject or a cause. For your FREE Daily Horoscope Monday 24th October 2016 please see below...

As Mars, your guide, moves out of the orbit of potent Pluto, the urgency you've felt regarding a goal or key ambition can begin to level out. While this aspect was ongoing you may have eradicated obstacles that had been holding you back, leaving the path clear. From now though, as Mercury gets more penetrative, your activities and insights around finances feature.

Even though a connection between Venus, your personal planet, and Neptune in your social zone might encourage you to edge around a tricky topic with certain people, another influence urges you to take a more straightforward approach. Indeed, with Mercury's move into your sector of relating, it's all about being honest but phrasing your words more diplomatically.

The present backdrop suggests your instincts may be hinting that all is not as it seems regarding a matter of importance. While this might be true, a developing angle between Mars and Uranus suggests friends could influence you to ignore that gut feeling. Don't. If you listen to this you might make a decision that may not be universally popular, but one that's right for you.

With the Moon in your money zone aligning with Uranus in your sector of ambition, you may feel emotionally buoyed up and ready to change direction. If you've held back from informing someone of your intentions, then the cosmos encourages you to introduce the subject sooner rather than later. Mind, you can still do this with a light touch, especially if they may be startled.

As Mercury glides into Scorpio and your domestic sector, it moves to link with the Sun, your ruler, and could coincide with a decision that is deeply personal and perhaps something that you feel you want to keep private, at least for now. Your horoscope reveals that doing so will allow you the space to ruminate on your feelings at your own pace, without worrying too much about others' needs.

While it's certainly possible to disagree and stay on the best of terms, you may need to tread with care over coming days, particularly if you and another have had difficulties regarding an issue in the past. This time any differences might involve a mutual project or plan that could be at a critical stage. Try to focus on the big picture in order to pick your way through this.

As Mercury leaves your sign and moves into Scorpio, you could find it easier to discuss a matter you have pondered for some time. Over the days ahead you might find you have little option but to be completely honest, despite the potential consequences. Then again, your ideas about what you value and who you value, can go through a period of transition, Libra.

This can be a focused time of the year for you, when you may have a greater awareness of your path and purpose in life and be keen to do something about it. While this doesn't have to mean giving up your present lifestyle or strands, you may feel moved to phase out activities that don't bring the level of satisfaction they once did - even if it does create something of a stir.

As Mercury moves to join the Sun in a secluded sector of your chart you could sense a stronger connection to your intuition or you may find yourself feeling more doubtful. Over coming days this more psychological dimension is going to get stronger and stronger. Don't try to bat this away. Various escapist tactics may appeal to you, but deal with any concerns that arise.

The current backdrop can see you homing in on a wish that's been on your to-do list for some while. This could be something like going to a place you've long desired to visit or opting for a once-in-a-lifetime experience. In general, thinking more about your longer term hopes and talking about them with friends, is going to come to the fore now. Exciting times, Capricorn!

With Mars, the planet of action, currently moving through your psychological zone and angling towards Uranus, you may be seeing certain important goals in a new light. There's even a chance that you may have a different perspective on them that could entice you to make a few changes. If your life has been compromised because of these, it can prove to be a release.

Venus is bringing the way you relate to the fore, and its alignment today with the dreamy Neptune could see you unsure of someone's sincerity. Nevertheless, the planet of relating also makes a positive tie with the uplifting energies of Jupiter in your sector of shared benefits, so it's possible that if they are going to gain from this Pisces, then you will too.