2019-10-07T00:00:01Published: Saturday, 26 October 2019
by Patrick Arundell
, contact Patrick on Facebook or Email.
With the Moon in Libra forging an awkward angle to prudent Saturn we may find someone's approach rather narrow and constricting. 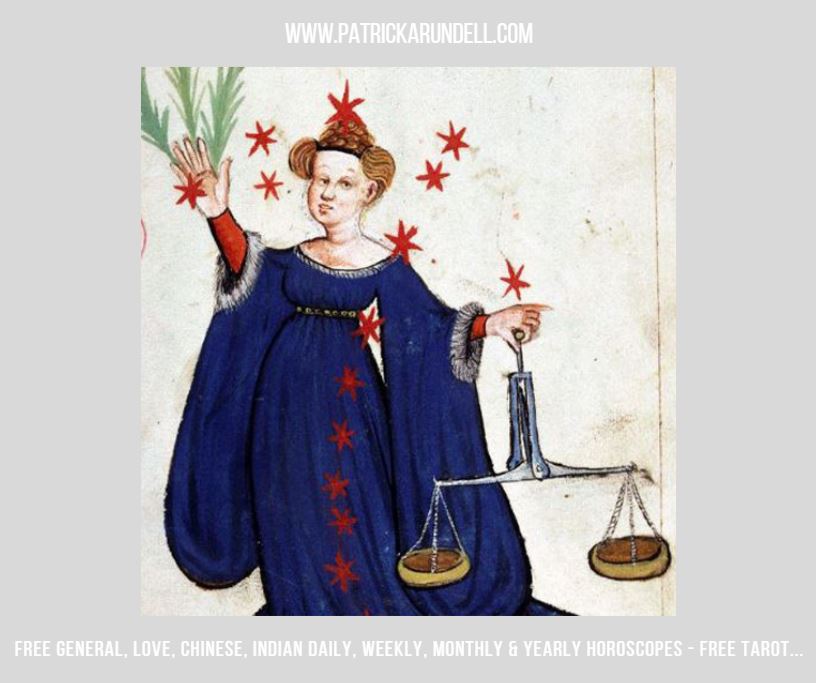 With the Moon in Libra forging an awkward angle to prudent Saturn we may find someone's approach rather narrow and constricting.

As a temporary aspect this may not be too much of an issue except if we are trying to agree on something. Tact can be helpful though. For your FREE Daily Horoscope Saturday 26th October 2019 please see below...

Intense and restless energies are building up, so if you find yourself frustrated by circumstances then the desire to escape from them could grow stronger. In order to navigate through the days ahead, it helps to understand your priorities as this will prevent you from being derailed by other issues and distractions. The Moon/Mars tie is also an opportunity to clear the air if necessary.

A certain friend could have a profound and very persuasive effect on you, and may even be wearing down your resistance regarding a certain matter. However, this might not be such a bad thing. Clinging to an idea that isn't working for you may be causing you unnecessary upset too. If someone can help you see another way forward, it may bring much relief and even freedom.

Has someone seemingly closed a door on a friendship or other relationship? If so, there is something you can do to remedy matters. You may need to be the one to make the first move though, especially if you have taken this issue to heart. Your horoscope suggests that letting them know how you feel can help ease tensions, as they may be busy with key issues and not aware that anything is wrong Gemini.

If you know that addressing a matter is the right thing to do, then pushing ahead could help bypass any hesitation. Yet what you say and do could make a bigger impression than you know, so it is certainly wise to reflect before you begin. A prudent aspect could see you over thinking in general though. As not doing anything might make matters worse, action may soon resolve this.

Though you might prefer it if things went the right way, try to avoid being critical of anyone who makes a mistake. Key aspects which involve an awkward link to prudent Saturn, could be the reason you feel moved to point out someone's shortcomings. However, if you can talk things through with them and even help them out, your relationship could remain a very positive one.

Feeling blocked? The more energy or money you put into something, the more it may seem to be going nowhere Virgo. This might encourage you to redouble your efforts and push harder to get the momentum going. Ease up if you can, as you may see progress later in the week. A more restless focus could lead to a rash decision though. If you want to avoid any fall out, go easy.

If you have avoided speaking out in the hope that a certain relationship issue would resolve itself, then today's key line-up might encourage you to say something. Present influences suggest that you may have had big expectations of someone, and that perhaps they have fallen short. A decision to take them as you find them, along with a gentle discussion, can graciously resolve this.

Mars's awkward angle to Saturn may bring a realization that you have been holding yourself back unnecessarily, and that there is much you could do to improve certain matters if you only felt more self-assured. Though friends may be very supportive, real progress can be made through not being too cautious, but by taking small steps to move out of your comfort zone.

Something you may have invested a lot of time and energy into may be at a crucial stage Archer. You could even be wondering whether you should continue or perhaps cut your losses and move on to something else. Avoid doing anything on the spur of the moment, especially if you feel frustrated at a lack of progress, as it may be that a few adjustments are all that's needed here.

A relationship may have reached a critical point where you might be wondering what to do next. This could refer to a romance, but it might also be linked to a collaboration or even to a business opportunity. As feisty Mars angles towards prudent Saturn, obstacles could get in the way of progress. Be sure the other person chimes with you before you take things further Capricorn.

If you feel confident, then following through on a plan or ambition will likely be no problem at all. With a potent aspect angling towards a reflective sector though, it's possible that a whole range of emotions may come to the fore and could leave you wondering what your next steps should be. Take your time and avoid impulsive moves, as you'll sense when the moment has come.

A key influence suggests that certain friends could be putting a damper on some of your best ideas. They might be critical of everything you find interesting and exciting, so you may want to steer clear of them over coming days. Even so, Venus's tie to potent Pluto suggests that the advice of one special person to follow your passion can ring true Pisces, and give you confidence.