2019-11-01T00:00:01Published: Sunday, 24 November 2019
by Patrick Arundell
, contact Patrick on Facebook or Email.
With luscious Venus merging with upbeat Jupiter in the last degrees of Sagittarius this convivial aspect can see us enjoying social gatherings. 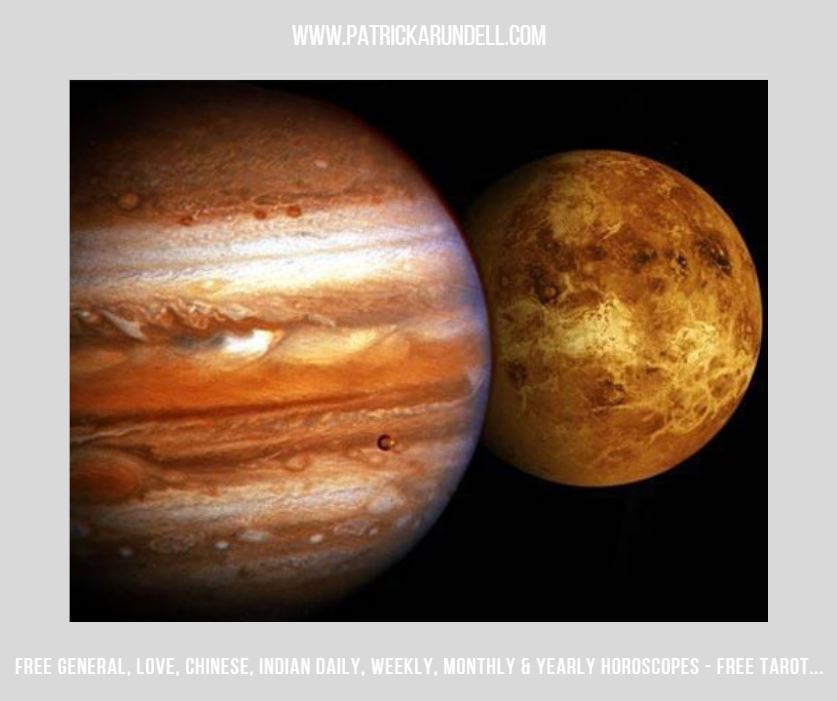 With luscious Venus merging with upbeat Jupiter in the last degrees of Sagittarius this convivial aspect can see us enjoying social gatherings.

Under this warm and lively influence we might make new friends in an instant and enjoy trips or travel adventures.  For your FREE Daily Horoscope Sunday 24th November 2019 please see below...

Rein it in Aries, as with a feisty Mars Uranus link showing up, the coming days can see you stirring up a touch of chaos all in the name of liberty. Is this the kind of freedom you want though, especially as there is a likelihood that you might undo something you have worked hard for? A pause for thought can prevent you from making a rash move, and encourage a better way.

There is a side of you that can be competitive, and this may come to the fore over coming days, especially if you feel strongly about something you want. It doesn't have to be this way though. With tactful Venus making a helpful merger, you could offer the hand of friendship and consider finding a way to co-operate in this situation, which might then work out well for all involved.

You may have a cast-iron determination to get something done, when an out of the blue event scuppers your schedule. Be prepared to be flexible over coming days, and to have a plan B and C ready if necessary. Feel restless and edgy? A hearty walk or hike, or perhaps a good workout, could leave you feeling soothed. Attending a social event? Something good may come from it.

A meeting could have the effect of shaking you up, and for a short while it could seem as though a whirlwind has entered your life. Something about this person could prove stirring and might also shatter any illusions you had about them. On a similar note, the edgy Mars Uranus aspect could encourage you to act out of character Cancer, by seeking thrills and excitement galore.

Just when you thought it was safe to chill, you may find you are called to help out in a critical work situation or with something that needs urgently attending to. And this could affect your plans Leo, and might mean that the well-deserved rest you had planned fails to materialize. Your response though depends on who you are dealing with, as some adore drama for drama's sake.

With the Moon heightening feelings around a Mars Uranus face-off, this can be a time of reckoning. If you have put up with an edgy situation for too long now, you may be ready for a spat. And unless you make a point of holding back, you could say all those things that have been building it. Bear in mind Virgo, this could jeopardize a bond that has taken time to build up.

While this can be a lucky day in some regards, a revelation linked to issues associated with finances, business or an intimate bond, could cause a disconnect. And because stubborn energies are involved, it could take some time before communication resumes. Your horoscope hints that an upbeat Venus Jupiter tie may be enough to save the day though, if you are willing to reach out and resolve this Libra.

If there has been an imbalance of give and take in the relationship department, a dramatic Mars Uranus opposition could rectify this, but not without a conversation that could be sparky rather than sparkling. If tensions have been building, the Moon's alignment with this aspect could cause feelings to spill over. It is possible to work it out, but it might take something of a revolution.

Sometimes it can be difficult to let go of a plan in which you have invested a lot of time and energy, but this may be the situation you find yourself in over coming days Archer. The more you try to get it together, the more events seem to disrupt your efforts. If you find that frustration levels are beginning to boil over, let it all go and it might then finally come together.

The chemistry you feel around someone could prove irresistible, but that doesn't mean you should give in and run with those feelings. If anything Capricorn, it might be wiser to run in the other direction, as a chaotic blend of energies could cause emotional fallout. Your instincts seem to be spot on though, and if you sense this might not be good for you, then make a wide detour.

An event could upset the domestic and work routine, and might mean you need to scramble to get everything back on track. It might also set you thinking about your goals, career choice or the responsibilities that you have taken on, and how far they represent your authentic needs. If so, this could be a turning point and find you looking for ways to fulfil more heartfelt desires.

You may not be in the mood to bite your tongue and spare someone your feelings, especially if a conflict has been building between you. It could come to a head, and as stubborn as you might feel about an issue, rest assured, they feel just the same. If you want this relationship to continue, you'll need to find a way out of this impasse. If you aren't too bothered, then go on your way.