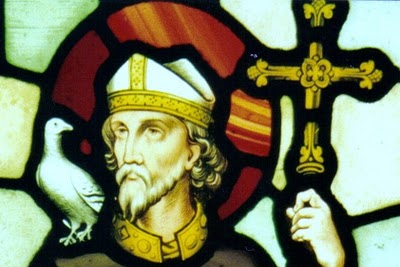 On the 1st March people of Welsh descent all over the world will be celebrating St. David’s Day.

To be honest we don’t really know a great deal about St David, although he may have died around 589. His mother was called Non and his father who was called Sant was the son of a king. St. David seems to have been a successful miracle worker and, once when he was preaching, he caused the ground to rise up giving him a natural platform. In 1398 his feast day was ordered to be celebrated in every church in the country (although this came to an end at the reformation).

Poor St David has not been lucky when it comes to his feast day; in 2006 a poll found 87% of people in Wales wanted his day to be a public holiday. In 2007 a petition to this effect was sent to the then British Prime Minister Tony Blair: he rejected it. Nevertheless, many Welsh people continue to celebrate their saint’s day by wearing daffodils or leeks and eating the Welsh national dish cawl.

In case you were wondering, cawl is a lamb and leek based broth which helps keep the biting March winds at bay.