2016-07-07T00:00:01Published: Saturday, 23 July 2016
by Patrick Arundell
, contact Patrick on Facebook or Email.
Is your garden blooming? If not you try asking for the help of St. Phocas whose festival is celebrated today. 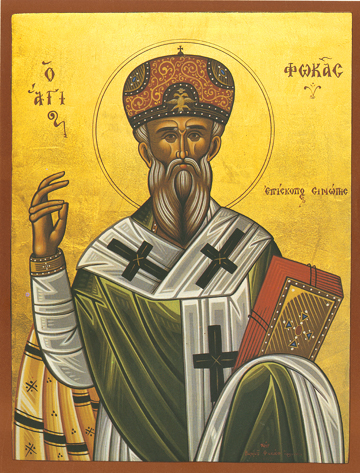 Is your garden blooming? If not you might ask for the help of St. Phocas whose festival is celebrated today.

St. Phocas came from Sinope on the Black Sea and spent his time growing crops to feed the poor. You might have thought this would have kept him out of trouble, but you’d be wrong. His habit of helping his fellow Christians who were being persecuted brought him to the attention of Diocletian and not in a good way. Soldiers were sent to kill the saint, and as they were hunting for him they met Phocas himself and asked where the saint was hiding. In an act of remarkable charity he put the soldiers up for the night, then, in an even more remarkable act of sang-froid, he dug his own grave early in the morning. When the soldiers awoke he told them who he was. The bemused soldiers tried to spare him but Phocas was having none of it and demanded to be beheaded.

In his home area sailors offer food ‘the portion of St. Phocas’ to an entity called the Klabautermann who is said to appear to doomed ships. Confusingly the Klabautermann can also help sailors and sometimes his image, that of a small sailor in yellow smoking a pipe, is carved on ships’ masts for good luck.